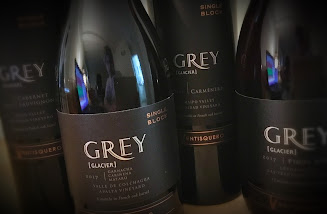 The Viña Ventisquero Grey line of wines is the expression of a single block of vines from different growing areas in Chile.  Ventisquero has vineyards in the Coastal Maipo, Casablanca, Colchagua, Leyda and Huasco valleys.  Head winemaker Felipe Tosso takes his craft seriously, comparing the creation of a wine to the raising of a child.  He says, "it's just like being a father. You give birth to a son, you raise and mold him so he can follow his destiny."

In addition to the wine samples, I was given tips on which Chilean music to pair with the various wines.  I have included Spotify links to the suggested Ventisquero selections. 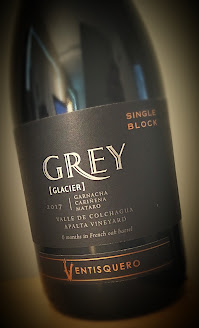 The Ventisquero Grey GCM wine is a traditional blend of 62% Garnacha, 19% Cariñena and 19% Mataro grapes from the Valle de Colchagua's Apalta area, the terraced, hillside Roblería Vineyard.  You may know Mataro better as Monastrell or Mourvedre.  The soil is poor - good for grapevines - made up of clay and lots of stones.  2017 was a hot year, so the grapes ripened  earlier than usual.  The wine was aged for six months in neutral French oak barrels, stands at 14% abv and retails for $23.  The winery says the Grey GCM wine is "complex, like the music of Chilean artist Nano Stern, which stands at the crossroads of various influences and genres such as rock, folk, fusion and trova."

This wine is medium dark in color and in just about everything else.  Wonderfully dark.  The nose is black fruit, savory tar, a meaty kind of note and some light oak tones.  The palate allows the savory aspects a little more room to move.  There is a lip-smacking acidity; the tannins are firm.  I tried mine with smoked pork belly and some apple smoked Gouda, with great results. 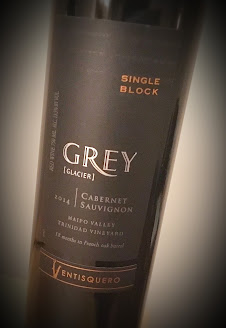 This wine comes from Block 38 of Ventisquero’s Trinidad Vineyard in the coastal Maipo Valley.  The winery refers to this Cab as "non-traditional," and it does seem to me to be more rustic than elegant.  The 93% Cabernet Sauvignon grapes are joined by 4% Petit Verdot and 3% Cabernet Franc.  Growing in the 2014 vintage was marked by a typical summer featuring moderate temperatures and no rain.  The wine was fermented in stainless steel tanks, then aging took place over 18 months in French oak barrels, one-third new - and another eight months in the bottle.  Alcohol sits at a restrained 13.5% abv and the wine sells for around $20.

This wine is dark and savory.  The black fruit comes along with cedar, vanilla and a chalky earth tone.  It is nothing like Napa Cabernet Sauvignon, but more in line with Paso Robles.  Lots of South American minerals are having a bit of roughhouse here.

Ventisquero likes to pair their Grey Cab with Violeta Parra, one of the most iconic Chilean artists.  Like the wine, they say she is "classic yet surprising, elegant and inspiring." 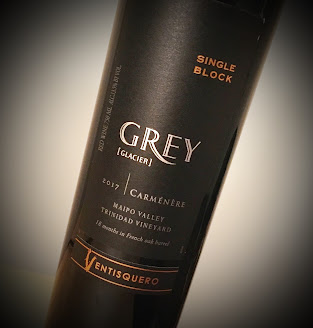 This red wine is made of Carmenere grapes, grown in the Trinidad Vineyard in Chile's coastal Maipo Valley.  Chile reportedly has the largest vineyard area planted with Carmenere, the country's flagship grape.  Only half of the grapes were crushed for fermentation.  The wine was aged for 18 months in French oak barrels - one-third new and two-thirds second and third use - where malolactic fermentation took place.  Alcohol in just 13.5% abv and the retails price is $22.

This is a beautiful Carménère, all earthy and full of savory minerality.  The blackberry and black plum aromas creep through the smell of that dirt with tar, forest floor and tobacco all over them.  A hint of vanilla sweetens the sniff a bit.  On the palate, the dark fruit is draped in sweet oak spice, and you'll find a bucketful of tannins until the glass has been sitting for awhile.  This is a steak wine, intended for a big, juicy piece of beef.

Just as this grape is iconic to Chile, the winery says Cueca music is essential to Chilean culture as the country’s national dance and music. 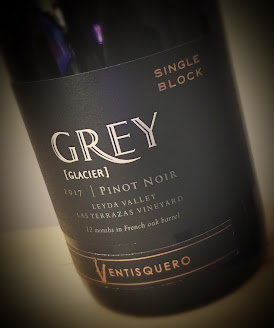 The Grey Pinot Noir is a complex wine which the winery says is typical of the Leyda Valley, a growing area known for excellent acidity and mineral notes.  The Las Terrazas Vineyard's soil starts off with a bit of red granitic clay, and gets rockier the deeper the roots reach.  The fairly warm 2017 vintage prompted the pickers to collect the grapes a little earlier than usual.  Fermentation took place in steel tanks, while aging took a full year in French oak barrels, 15% of them were new, 30% second-use and 55% third-use.

This Chilean Pinot Noir offers a nose that is heavy with cola, black tea and coffee grounds.  The savory aromas actually outweigh the fruit.  It is a medium-weight wine, not very deeply tinted, and it rides light on the palate.  The acidity is brisk and the tannins firm.  This is not a Burgundian take on the grape, for certain.  It is more playful than elegant, more rustic than beautiful.

Pair this delicate grape with Francisca Valenzuela's music, whose slow yet powerful songs are as vibrant as the Grey Pinot Noir.