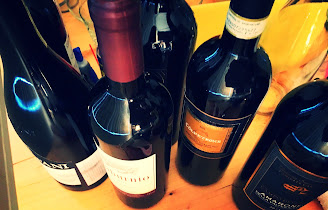 Virtual wine tasting events are no stranger to me, especially in the era of COVID-19.  Get the box, open the box, log on and taste from home.  No social distancing to strain the process, no mask needed.  I was invited to take part in a Zoom gathering recently along with two dozen other wine writers.  The event was called the Tre Bicchieri Web Show, which featured twelve different Italian wines from various producers.  My shipment was delayed several times - it came from Italy, after all - so I didn't get to take part in real time, but the box finally arrived and I was finally able to taste the wines inside.

The Tre Bicchieri Web Show was presented by Gambero Rosso, a Rome-based Italian wine and food magazine that was founded in 1986.  It was their first-ever Master Class, which indicates that there are more planned.

The interactive event was hosted by Lorenzo Ruggeri, the wine guide's international editor, with comments along the two-hour journey from each winery's representative.  This is the second installment on Now And Zin Wine to feature the wines that were tasted.  We started with four amazing white wines and now move on to four of the eight reds included in the assortment. 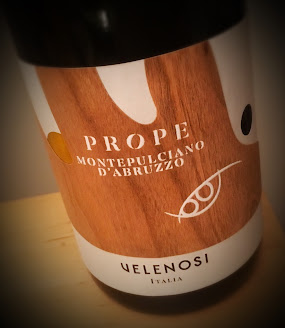 Ercole Velenosi and Angiolina Piotti established Velenosi in 1984 in Ascoli Piceno, in the Marche region.  They now make Abruzzo wines in Controguerra, to the east and across the border to the south.  The first vintage from that outpost was in 2005.  Angela Velenosi now sits on the board, while Filippo Carli and Luca Fioravanti work in the cellar.

Prope is made completely from Montepulciano d’Abruzzo grapes, grown in gravelly clay soil.  They are destemmed and placed in stainless steel tanks for vinification, which could last as long as a month.  Then, the wine is transferred into large barrels for 12 months of aging.  Alcohol is 14% abv and the retail sticker should be around $15 when it is available in the U.S. market.

This wine is tinted medium dark ruby and shows purple around the rim.  It smells of bright, ripe cherries and strawberries.  There is not a big influence of oak.  The palate is nice and fresh, with fruit in the forefront and a gentle acidity.  The tannins are easy-going enough for gulping, but the wine does pair well with tandoori lamb from my favorite Indian restaurant.  Ruggeri noted the flavor of dried fruit and meatiness at the end of the sip. 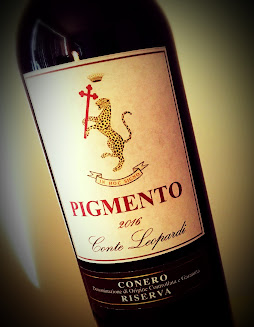 The Count Leopardi winery is in Numana, Marche, on Italy's Adriatic coast.  The estate is owned by the Leopardi Dittajuti family and has been for some 15 centuries.  Back then, one of the Leopardis was made a bishop, then killed by pagans, then made a saint.  Today, Piervittorio Leopardi is dedicated to the beautiful area, the forests, the limestone massif, and to Montepulciano, Conero's traditional grape, which has been vinified by Leopardi for nearly forty years.  The vineyards between Numana and Sirolo are rich in limestone and marl and cooled by the Adriatic Sea.

Leopardi's Pigmento Riserva was made by winemaker Riccardo Cotarella, completely from Montepulciano grapes.  The fruit was late-harvested - in the end of October and early November - a roll of the dice that dared the fates to bring damaging rains.  He lucked out.  Leopardi says this elegant, full-bodied, well-balanced Riserva wine has great structure, good concentration and smooth, consistent tannins.  Alcohol tips 14% abv and the price tag reads $38.

As the name implies, this wine is very dark colored - hardly any light gets through.  The nose is complex and lively - black cherry, cassis, vanilla, cedar.  On the palate, a bit of licorice joins the fruit profile.  Acidity is brisk, but not racy.  Tannins are firm, but not toothy.  I would like a sausage or pork chop with it, but I would settle for a salami. 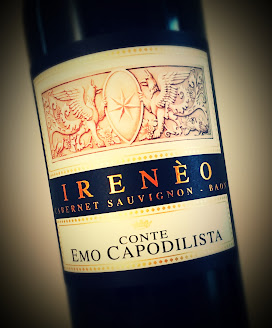 Giordano Emo Capodilista's estate is located in Veneto, in the Euganean regional park.  The vineyards lie in the northern part of the area - in the almost Alpine territory of Selvazzano.  More recent acquisitions are in the volcanic hills to the extreme south - in the more Mediterranean area of Baone.  The two sites are not that far apart - only about six miles - but they feature very different terroir.  The grapes that make up Irenèo are 90% Cabernet Sauvignon, grown along the slopes of Monte Castello, while the 6% Merlot and 4% Carmenère came from the area around Villa Emo Capodilista.  The wine was aged for a year in barrique barrels, then six months in the bottle.  Alcohol hits 14% abv and the retail price is $30.

This Italian Cab has a bit of Merlot and Carmenère mixed in.  The color is medium dark garnet with a bit of bricking around the edge.  Aromas of blackberry are joined by the smell of minerals and a whiff of smoke.  The palate has a chalky note to it - the owner referred to the wine in his presentation as "salty."  The tannins are manageable and the acidity is middle-of-the-road.  The wine really puts me in mind of Cabernet Sauvignon from Paso Robles, not Napa.  I paired the wine successfully with grilled kielbasa and charred Brussels sprouts. 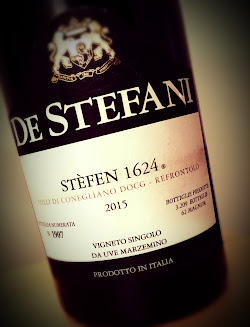 Still in Veneto, up north in Piave, owner and winemaker Alessandro di Stefani steered away from the so-called easy money of Prosecco in favor of still wines with character.  The results should make everyone glad he made that choice.

The 2015 De Stefani Colli di Conegliano Rosso Stefen 1624 was made from 100% Marzemino grapes grown in clay soil which is mixed with minerals from the Southern Limestone Alps, the Dolomite Mountains.  Marzemino is said to have been Mozart's favorite wine grape, and that is completely understandable.  The single-vineyard grapes were destemmed and slowly fermented on the skins up to a point, when the juice was put into oak barriques, where it stayed for three years.  Aging continued in the bottle for 18 months before release.  Alcohol checks in at a lofty 15.5% abv.  Depending on the vintage, it can be as high as 17.5% alcohol.  The sticker price is up there as well, at $120.

This wine is deep, dark and delicious.  The nose opens with a whiff of smoke, which leads to aromas of dried cherry, cedar and pipe tobacco.  The palate shows a nice mix of fruit and savory - the cherry flavor finds a black raspberry partner.  Firm tannins and bright acidity make it dance on the tongue.