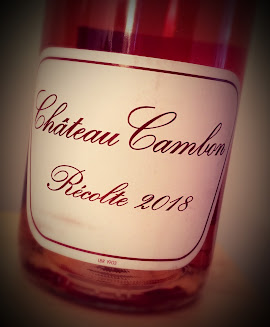 In the U.S folks may know very little about Beaujolais wines except that they see them stacked in their grocery store's wine aisle every Thanksgiving.  It is true that for many, Beaujolais Nouveau is a holiday tradition, but the Gamay grape is not just a one-trick pony.  They also go pink.

Beaujolais vineyards account for more than half of the world's Gamay grapevines, and most of them go into red wines, the youthful Nouveau as well as the more respected Beaujolais Cru wines.  Some of them, however, are used to make rosé wines, giving Beaujolais a usefulness in the spring and summer as well as the fall and winter.  Of course, good rosé goes great with leftover turkey and ham, too.  I was given the opportunity to sample a handful of Beaujolais rosé wines.

Château Cambon is a small parcel of Beaujolais vineyard land between Morgon and Brouilly.  They make their pink wine from whole cluster Gamay grapes, stems and all, keeping the skins in contact for two days.  The wine is aged for five months and bottled with minimal SO2.  Alcohol hits 12% abv and the retails price is around $20.

This pink Gamay wine has a fairly rich color, rather like salmon meets orange.  There is a bit of a Jolly Rancher note to the strawberry nose, and an herbal angle.  Strawberry plays big in the flavor profile, too, with a distinctive earthy tone to it.  It has great heft - it drinks like a red - and a very refreshing acidity. 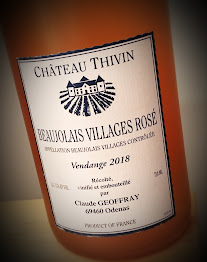 Château Thivin dates back to the 14th century and is now under the guidance of the fifth and sixth generations of the Geoffray family, who bought the property in the 18th century.  The Château Thivin Beaujolais Villages Rosé is imported by Kermit Lynch, which is as good a recommendation as you are likely to get.  The wine’s alcohol level sits at 13% abv and the retail price is somewhere around $18.

This wine is delicately tinted light salmon.  Its nose is quite fruity - cherries, strawberries, orange - but also graced with a minerality that serves as a bedrock base for all that beauty.  The palate brings ripe red fruit, a hefty mouthfeel and a zippy acidity into play.  It’s great for salads, and even better just for sipping. 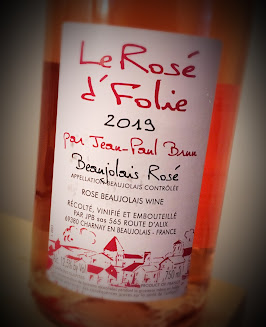 The owner and winemaker of Domaine des Terres Dorées is Jean Paul Brun.  The 40-acre family estate is in the village of Charnay, in the southern part of Beaujolais, just north of Lyons.  The area is beautifully nicknamed "the Region of Golden Stones."  The wine is imported by the well-respected Louis/Dressner Selections.

This wine glows salmon pink in the glass, and smells of fresh, ripe strawberries and cherries.  On the palate the strawberry takes the lead, while a note of stone fruit slips into the arena.  There is a fairly zippy acidity to go along with the flavors.  It's Beaujolais, but bears a striking resemblance to Provençe. 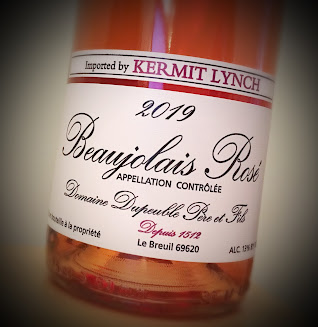 This pink wine comes from the southern Beaujolais hamlet of Le Breuil, where Domaine Dupeuble has been turning out wine for about five centuries.  Importer Kermit Lynch says the estate has only changed hands three times over that span, most recently in 1919.  Lynch began his involvement with the brand in the 1980s, by importing the estate's Beaujolais Nouveau.

The vineyards are tended through the practice of lutte raisonnée, which literally means "reasoned fight" but is translated in English as "supervised control."  The practice shuns synthetic fertilizers, herbicides and fungicides in favor of a more natural approach.  It is seen by many as a first step towards organic farming, but is also a happy medium for some growers.  Alcohol comes in at only 13% abv and the retail price is $17.

The Lynch website describes the 2019 Gamay rosé from Domaine Dupeuble as the gold standard of Beaujolais rosé.  Promised are aromas of white flowers, rhubarb, and wild berries, leading to a palate which is smooth and rounded yet full of those Beaujolais minerals and a hint of citrus on the finish.  A subtle herbal quality and vibrant acidity make it a perfect match for light summer fare.