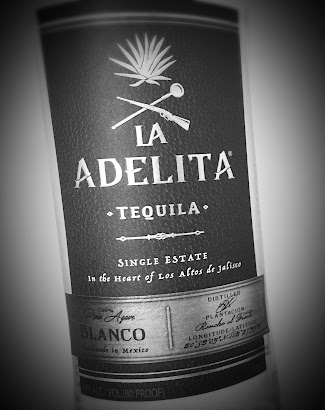 Does a single-estate tequila have the same cachet as a single vineyard wine?  It does if you listen to the makers of the La Adelita line of tequila.  A single vineyard often imparts more characteristics to a wine that are inherent to the site.  One might draw a similar conclusion about the selection of specific hops used in brewing - the locale determines the flavor profile.  In tequila, the terroir, if you will, of the plantation where the agave plants are grown is what gives the sip its character.

The folks who market La Adelita tequila say a "partnership of distillers, agave farmers and cult wine artisans" crafted this array of spirits.  The line is named after women warriors who took part in the Mexican Revolution in the early part of the 20th century - a decade-long armed conflict which sprang from a rigged presidential election.  The name is also borne by one of the most famous ballads of the revolution and "la Adelita" has come to signify any woman who is fighting for her rights.

The Blue Weber agave estates - Rancho El Fraile - are in the highlands of Jalisco, where generations of jimadors have harvested the piñas when their time had come, usually after about seven years of growth.  The tequilas are distilled in small copper pot stills that were imported from Cuba shortly after the Mexican Revolution.

La Adelita Tequila founder and CEO Chris Radomski says, "As the tequila category blew up, it lost its authenticity, and I wanted to do something at a higher level while keeping it authentic," with an affordable price point.

La Adelita tequila comes in five different varieties: Blanco, Reposado, Añejo, Cristalino and Extra Añejo.  I was provided with a sample of Blanco, a bright, clear tequila with notes of lime and a clean finish.  The others in the line are aged in American oak whiskey barrels for three, 18 or 48 months.  La Adelita Blanco carries an alcohol content of 40% abv - 80 proof - and retails for $40.

If you are looking to fashion some cocktails, the margarita is no doubt the top tequila-based drink.  Don’t buy the mix, because margaritas are incredibly easy to make, using only tequila, triple sec, and lime juice.  Experiment with the portions to suit your taste.  Almost as easy is the Tequila Sunrise - tequila, orange juice, and grenadine.