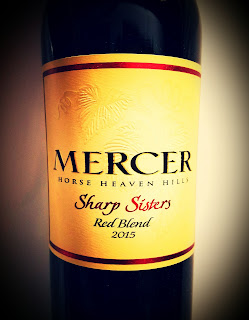 The Mercer family has been working the land in southern Washington's Horse Heaven Hills AVA for more than a hundred years.  Rob and Will Mercer not only grow wine grapes, but also other fruits and vegetables - like baby carrots - near Prosser, Washington with the use of sustainable farming practices.

The 2015 Sharp Sisters Red Blend shows a family name and includes Cabernet Sauvignon from the Eagle & Plow Vineyard, Merlot from the Dead Canyon Vineyard, Grenache, Syrah and Carignane from the Spice Cabinet Vineyard and Petit Verdot from Milt's Vineyard.  Winemaker Jessica Munnell used nearly equal amounts of Cab and Syrah, blended with the rest in smaller quantities.  Alcohol is large, at 14.8% abv, but the price tag is reasonable, at just above $20.

The Sharp Sisters red is inky purple, with a nose of big, black fruit and quite a savory side. I smell cigar box, spice rack and cedar plank on the nose, in addition to the plums and blackberries. The palate comes on less brawny that expected given the high-octane alcohol number. It's a pleasant array of black and blue fruit that is remarkably smooth, yet its tannins are muscular enough to sit with a ribeye. 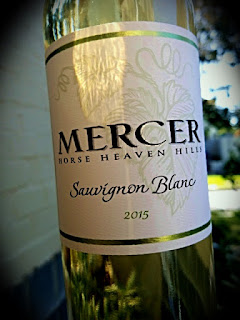 The Mercer family has been working the land in southern Washington's Horse Heaven Hills AVA for more than a hundred years.  Rob and Will Mercer not only grow wine grapes, but also other fruits and vegetables - like baby carrots - near Prosser, Washington with the use of sustainable farming practices.  Winemaker Jeremy Santo does a fantastic job with the fruit he's given.

This wine is 100% Sauvignon Blanc from the Mercer estate Princeton Vineyard. Alcohol hits low, at 12.5% abv, perfect for a wine that's intended to refresh, not conquer. Fermentation took place with the use of a yeast that brings out the grapefruit, passion fruit and lychee notes. This white was aged in 100% steel tanks, malolactic fermentation was prevented.

The wine has a faint yellow tint and a nose that's more savory than grassy. It's more like a California Sauv Blanc than a New Zealand one, even though it's neither. . A lanolin notes masks the grapefruit and lemon aromas, but does not hide them. The palate offers more fruit, but a nice mineral-based salinity sails ahead of it. There's plenty of acidity here and a lengthy finish of Meyer lemon.

Posted by Randy Fuller at 5:35 AM No comments: 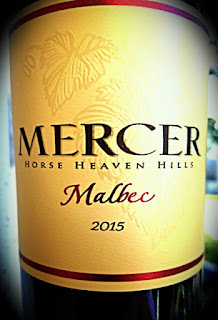 The Mercer family has been working the land in southern Washington’s Horse Heaven Hills AVA for more than a hundred years.  Rob and Will Mercer not only grow wine grapes, but also other fruits and vegetables - like baby carrots - near Prosser, Washington with the use of sustainable farming practices.  Winemaker Jeremy Santo does a fantastic job with the fruit he's given.

The Mercer 2015 Malbec (78%) and Cabernet Sauvignon (22%) grapes were grown in the Spice Cabinet Vineyard on a southeast slope above the Columbia River. The 2015 vintage was hot, and fruit came in about two weeks ahead of schedule. The grapes were not crushed, which they say preserved all the whole-berry characteristics. The juice experienced malolactic fermentation in French oak barrels, where the different lots aged for 18 months before being blended. Alcohol hits a lofty 14.8% abv and sells for around $20, which is a great deal.

The Mercer Malbec looks dark ruby in the glass. The nose offers some beautiful dark fruit - plums, blackberries and currant - and sticks a lovely dose of French oak in there. A nice, savory hint of black olives lurks in the background. The palate is just as enjoyable, with a fruity focus augmented by peppery spice and cinnamon. This is a wine that will be a hit at the holiday table, no doubt. It's a festive, fun red that can hold its own with the standing rib roast.

There may not be another American Viticultural Area named so poetically as the Horse Heaven HIlls AVA in eastern Washington state. With images in our heads of wild stallions leaping over grapevines, we turn to the Mercer Family for some wine befitting that waking dream.

The Mercer Estate Winery has a five-generation legacy of sustainable farming, not just for grapes, but other foods as well. A Scottish Highlander came to America before the Declaration of Independence was signed, and his descendants headed west and settled in what is now the Horse Heaven Hills region a hundred years later, growing cattle, sheep and wheat.

Don & Linda Mercer planted the family’s first grapes in the early ‘70s and started making wine about eleven year ago. Winemaker Jessica Munnell considers herself lucky to have access to the fruit of the Horse Heaven Hills in the Mercer’s seven vineyards

Samples of two of the Mercer Estates wines were provided to me for the purpose of this article..

304 cases of this wine were produced, and the bottles retail for $24.  The blend is simple: 76% Malbec and 24% Cabernet Sauvignon and it has alcohol at 13.7% abv. The grapes for this wine came primarily from their Spice Cabinet Vineyard, sitting on a southeast slope above the Columbia River. It aged for 24 months in French and American oak barrels.

It’s a dark wine, inky. The nose is full of blackberry and spice, and to a lesser degree, earth and smoke. It smells, and tastes, a bit like Bordeaux - which I would guess they’d be pretty happy about in Washington State. In the sip there is dark fruit and plenty of it, but a savory aspect joins in for a really balanced approach. The tannins are capable enough to match up with tri tip, but they don't irritate if you just want to sip a good Malbec. A really good Malbec.

They made 2,725 cases of this wine that sell for $24 per bottle. The kitchen-sink blend shows 47% Merlot, 41% Syrah, 10% Cabernet Sauvignon, 1% Sangiovese and 1% Petit Verdot. The Merlot and Cab came from their Princeton Vineyard, Syrah came out of the Dead Canyon Vineyard while the Sangiovese and Petit Verdot are from the Spice Cabinet Vineyard. The wine spent 20 months in French and American oak.

All those months in wood show up as soon as the glass is under the nose. Ripe red fruit and sweet oak notes explode in a showy perfume. There’s more. Smoke, forest floor and a boatload of spices - cinnamon, cardamom, nutmeg. On the palate we have amazing fruit, and why not? The Merlot and Syrah handle that heavy lifting well enough. The Cabernet Sauvignon gives structure and focus. Additional complexity from the Sangiovese and Petit Verdot equal an embarrassment of riches.

Crowd In For Some Cabernet

Columbia Crest dubs this wine "The first ever crowdsourced wine from vine to bottle." It was produced by folks who logged on to the website and told them how to make it. They set aside five acres of their Washington grapes in the Horse Heaven Hills AVA and let the people who are going to drink it make it.

The website extols that the instructions were pretty simple. Complexity is a must, and soft tannins. Some oak was ordered, but only 30% new oak. Oh, and harvest the grapes at night while it’s cool, will ya? We also like about 14.5% abv, if you’ve got it. I’m sure there may have been some other grapes in the blend, too. I’d guess Cabernet Franc for starters.

The 2014 vintage is being released this month on their website, and voting is about to end on what the 2015 should taste like. It’s a novel idea, if a little precocious and marketing-minded. Just like with Elvis fans, though, if you get enough wine lovers involved, they can’t be wrong.

We sometimes hear that too many cooks spoil the soup. In this case, we have a lot of cooks throwing their two cents into the pot and coming up with a winner. This crowdsourced Cab is quite dark in color and lovely to smell. It shows dark berries and dark spice, with just a hint of pencil lead. The flavors are bold and follow along the lines of the nose. Tannic structure is great and acidity superb. It’s a big, purple bruiser, and there’s no steak that’s going to push it around.