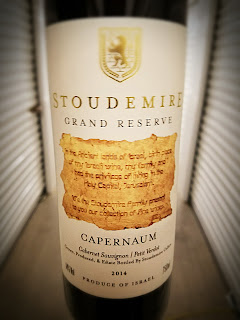 Former NBA star Amar'e Stoudemire has a thing for Israel.  He also has a thing for wine.  Stoudemire finished his career playing basketball for Hapoel Jerusalem.  He owns a chunk of the team and won a championship with them in 2017.  He had been in talks for three years about making wine in Israel before moving there and grabbing his chance.

The Stoudemire Grand Reserve Capernaum is produced by the Tulip Winery, from grapes grown in its vineyards in Kfar Tikva, in Israel's north.  It carries the Galilee appellation.  The wine's label points out that Noah was the first recorded viticulturist.  After the flood, the good book says, "he planted a vineyard."

Half Cabernet Sauvignon and half Petit Verdot, Capernaum is aged for 24 months in French oak barrels, hits 14% abv and is priced as lofty as a slam dunk, at $100 per bottle.  It's kosher, and is distributed by the Royal Wine Company

This Israeli wine could fool me into thinking it was from Napa Valley.  The nose shows black fruit, a bit of tar, sweet oak and a touch of graphite.  The palate is bold and very Napa-esque on its own.  The darkness flows through the flavor profile as with the aromas.  It's a rich and heady wine that probably needs a bit of time to show its full potential.  The young tannins are toothy and beg for red meat off the grill.

Did this about 7 years ago. The landscape has probably changed some since then.
Posted by Randy Fuller at 12:30 AM No comments:

The Twitter Tasting for Jeff Gordon Cellars' Joie de Vivre red wine was as keenly anticipated as some of the NASCAR races in which Gordon has driven.  Leading up to the October 24, 2012 event, participants chimed in with race-themed tweets.

"Waiting at the starting line," "Hope it's great from start to finish," "Buckle up for a great race to the finish" were just a few of the NASCAR-inspired comments beforehand.  "Engines are warmed up... 3, 2, 1, decant!"  One taster tweeted that he didn't have a pit crew to help him refill the glass.

When the green flag finally fell, it was off to the races with a red blend adorned with one of auto racing's most famous names.  Gordon is a four-time series champ, and he takes his wine just as seriously as his driving.  Cross country appeal applies here.  Gordon's wine may be made in Sebastopol, but its business address is in Charlotte.

The Jeff Gordon Joie de Vivre is a mix of separately vinified Napa Valley Cabernet Sauvignon, Merlot and Syrah.  The Cab hails from Corbett Vineyard, Spring Mountain, the Merlot comes from Solari Vineyard in Calistoga, while the Syrah is take from Yountville's Page Nord Vineyard.  The mountain Cab and valley-floor Merlot are aged in French and American oak, while the Syrah sees only French.  30% is new oak and 70% is oak that is two or three years old.  The wine ages in barrels for 20 months.

JDV takes the fast track in alcohol, with 14.5% abv number.  Just over 250 cases were made, the usual amount for a Jeff Gordon wine.

The winemaker for the 2008 vintage was August "Joe" Briggs.  His nephew, Jesse, took over the helm in 2011 with his uncle consulting.  The 2012 Indy International Wine Competition made room for NASCAR by awarding Joie de Vivre a gold medal.  The wine retails for $61 per bottle.

Very dark with an extremely aromatic nose, this wine makes its presence known from across the room.  Aromas of blackberries and blueberries have a slight herbal angle underneath and a spicy, brambly scent peeking out.  On the palate, dark fruit and spices dominate.  Despite all the months in oak, there is a very nice freshness to it, and the tannins are adequate without being too forceful.  It's a velvety smooth sip, with a final lap that goes on well past the checkered flag.

Joie de Vivre has a rustic feel, but its elegance ultimately wins out.  Tasters in the Twitter stream (#JeffGordonJDV) all seemed to love the wine, and experienced a variety of flavors as the wine opened up a bit.  One taster found a “sweet tobacco” note appealing, while another got Christmas spice.  Black cherry and leather also appeared.  There were plenty of comments about the “great finish” - another racing metaphor, which is entirely accurate.

Jeff Gordon himself made an appearance under his Twitter handle, @JeffGordonWeb.  Gordon commented the JDV “is my favorite wine that we produce because it’s smooth & balanced. Goes with many foods.”  One taster wanted to know how involved Gordon is in the winemaking process.  “A lot of time talking w/ Joe & Jesse. Regularly communicate. Go 2 CA when we can. Great team.”

Will Gordon have a vineyard of his own someday?  “That’s a dream for 1 day but it has it's pros & cons. I’m in 4 long haul, so we'll see.”  On the subject of celebrity branding of wine, Gordon says, “Think u get what u put into it. Dont agree w/ putting a name on a bottle & filling w/ juice.”

Another question dealt with whether he gifts his wine at Christmas.  “We absolutely gift @JeffGordonWine to our closest friends. @TeamHendrick employees are big fans of it as well.”  There was no indication as to whether the questioner made it onto Gordon’s Christmas list.

After tasting Jeff Gordon’s JDV, the participants in the Twitter event were in agreement that Gordon made a wise choice when he hired August Briggs as winemaker.  How did that come about?  “Lots of research & word of mouth when looking 4 quality boutique winemaker. His name came up a lot.”

The Twitter stream moved at an incredibly fast pace during the tasting - no surprise, I suppose, given Gordon’s main job.  JDV was so well received by the tasters that Gordon should do a donut in the infield grass.

The limited production of Joie de Vivre means it’s not easy to find, at least in brick and mortar fashion.  You can always order from the winery’s website.  It is recommended that you give this wine some time to breathe, so that the aromas and flavors have an opportunity to come forward.  Some of us in the event had the wine open for hours, but it seemed to be the consensus that 20-30 minutes in a decanter would be sufficient.


Posted by Randy Fuller at 2:00 AM No comments: