Driving is something which lost its charm for me a long time ago.  I don't know about where you live, but in Los Angeles driving the surface streets generally means going slowly from one red light to the next.  It's not a whole lot better on the freeways, but at least the freeways can take you to a place that's special.  I know US Highway 101 can.  That's how we get to the Santa Barbara County wine country.
On my most recent trip there, one of my stops was Lafond Winery.  I enjoyed my short visit there so much, I had to bring some of it back home with me for a time when I really needed a little reminder of wine country.  With so much driving this week, it's time.
Lafond's Santa Rita Hills Pinot Noir comes from those beautiful rolling hills dotted with vineyards.  Its purple  hue is so dark I can barely see through it.  There's currant on the nose, some spices and a fine earthiness, too.  But the big feature is a floral component that is gorgeous.  On the palate I find big dark fruit, tons of earth and a little tobacco.
The wine runs a little hot upon opening, and for half an hour after that, too.  Decant, or at least give it some time to breathe.  Its alcohol number is 14.5% abv.  2,800 cases of this wine were produced.  I bought it myself at the tasting room discount of $24.  It was worth the drive.
Posted by Randy Fuller at 2:40 PM No comments:

I wanted a Tempranillo at Cafe 322, the one on the wine list.  We had made our way to Sierra Madre, practically on the other end of the earth on a Friday night, after all.  I thought I should have a right to expect that the one wine on the rather extensive list that I wanted could be mine.  It could not.

We had come, Denise and I and Rob and Tricia, to see and hear the wonderful Jack Sheldon and his quartet.  The drive was easier than expected from Mid-Wilshire but still a bit of a pain for anyone who has had the glow rubbed off of driving in Southern California.  Our arrival at the Cafe had come not a moment too soon, and when I plopped myself down in a ringside seat immediately next to the stage, I went right for the wine list and my eyes went right for a Tempranillo.

The waitress explained that it was no longer available.  She did, however, offer a substitute.  It must have been a wine they were trying to move a lot of, because I thought it was rather strange for her to offer me a Napa Valley blend of Bordeaux and Rhone grapes in place of the Tempranillo.

At any rate, not wishing to interrupt Sheldon's performance any more than I already had, I accepted a glass of Hess Collection Mount Veeder 19 Block Cuvée.

It cost a mere $10 per glass, and offered up the expected aromas of rich black cherry, cedar and vanilla.  The effect of the wood was obvious in both the nose and the palate.  A great taste full of spice and cherry cola, with notes of tobacco and tar and something almost sweet, was more than adequate for my enjoyment.

By the way, Sheldon's quartet kicked ass.  He alternated blowing that trumpet and taking it easy while his band took solos.  Great solos. 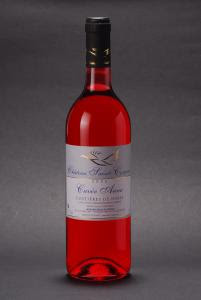 I asked Denise to smell this wine for me.  I do that when I can't quite pinpoint what I'm smelling, or if I need help identifying a particular aroma.  She has great olfactory senses, while mine leave a bit to be desired.  In this case she sniffed it and said, "ugnhngh."  I don't know if I spelled it right, but the unmistakable impression was not good.


I, however, found the aroma a bit more favorable.  I rather liked it, even though my initial reaction was very much like Denise's.  The nose is a bit funky - you might call it barnyard - but there is also a strawberry note that comes across rather forcefully and some raspberry a little further back.  The palate was quite funky also, with the same fruit in Sweet Tart fashion - not sweet at all, but quite tart.  The wine was open and refrigerated a couple of days when it took on a sort of tobacco leaf taste.  This description may not fully convey that I actually liked this wine, and for that I am sorry.  It is a dry rosé that I feel would not suit everyone's palate.  It certainly suits mine, though.
I first sampled this wine unchilled - as is my custom - and found it a lot more agreeable chilled on its third day after opening.  The color, by the way, is a little darker than I like my rosé, but it is a pretty shade of red.
Costières de Nimes  is located between the Rhone and Languedoc regions.  It seems to owe a lot more to the Languedoc than the Rhone.
Variety:  Syrah, Grenache
Appellation: France > Rhone Valley > Costières de Nimes
Vintage: 2006
Alcohol Level: 13.5%
Price: $7
Acquisition disclaimer: Purchased by the author
Posted by Randy Fuller at 9:35 PM No comments:

On my recent trip to Northern California, my first winery stop heading northward on Highway 29 was Trefethen in Napa. I must admit that I had never tried any of their wines, so I was starting at square one. They only charge $10 for an Estate Tasting, and $25 for a Winemaker's Reserve Tasting. The former features four wines while the latter offers five. There is no logo glass, by the way, so you won't be adding to your collection.

Barn-like on the outside, the interior was that of a warm and comfortable ranch house. Once inside, the people were quite friendly and ready to help. I opted for the Estate Tasting. As sometimes happens, I ended up getting an extra pour from the Winemaker's Reserve list.

Viognier 2007 - This one was flowery and perfumed on the nose. The palate featured apple flavors and a lemony tartness that served as a nice counterpoint. The finish was rather lengthy.

Cabernet Franc 2006 - An initial sniff on this one gave me a nose full of currants. The palate was like chocolates and cherries, but what really struck me in the taste was the spiciness, like white pepper. Very smooth tannins.

Double T Red Wine 2006 - This is a blend of the main grapes from Bordeaux: Cabernet Sauvignon, Merlot, Cabernet Franc, Petit Verdot and Malbec. Expecting a rich and fruitful nose, I was somewhat disappointed to find there wasn't much there. The taste, however, was very much full and satisfying. I didn't expect a vegetal front line, but the flavor seemed dominated by basil. A very odd taste all the way around, but quite enjoyable.

Cabernet Sauvignon 2005 - Deep red in color, this cab puts out quite a nose. Rich and fruity, there's even a hint of tobacco, sort of a "Swisher Sweets" aroma. The taste could qualify as dessert in my world, full of chocolate and cherry, with a finish that lingered forever.

Pinot Noir 2007 - Another guest was sampling this one, and I was offered a taste, too. Spices on the nose come through first, clove the strongest, and the fruit I pick up is a medley of red berries and cherries. It's a very spicy palate as well, and a lucsious drink to boot.
Posted by Randy Fuller at 8:19 PM No comments: