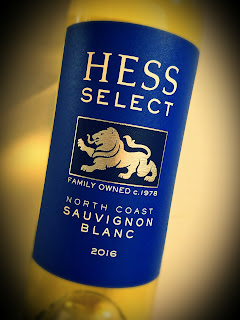 The lion on the Hess label represents the winery and its founder Donald Hess.  With estates in Argentina and South Africa as well as Napa Valley, this winery really gets around.  Hess staked out a claim on Napa's Mount Veeder in the 1970s, when there was still room to move around.  He retired in 2011 and passed the torch to the 5th generation of the family to carry on old traditions and forge new ones.  Dave Guffy is only the second person to lead the winemaking team at Hess.

The Hess North Coast Sauvignon Blanc 2016 is made to relax with, or have with some grilled asparagus.  The alcohol is predictably easy at 13.5% abv and it's also easy on the wallet at $11.

The wine has an herbal nose, not New Zealand herbal, though.  There is some grassiness in the pale golden liquid, but it is well accompanied by lemon, lime, grapefruit and tropical notes.  The palate is so fresh, it makes you happy if it's hot outside.  Chill this wine and take a few degrees off the thermometer reading.  The aforementioned citrus and tropicals show up as flavors, with a hint of stone fruit in there.  The minerality is crisp and the acidity is zippy.  The wine somehow makes me want a cold black sesame noodle dish to go with it.