Japanese Beer For Sushi That Tastes Great On Its Own 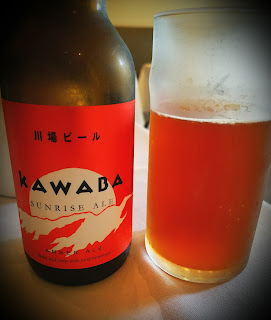 My much better half and I were having sushi the other night.  I love sushi, but the beverage options always leave me cold.  I like wine, but the choices never seem good at a sushi place, at least not the ones we frequent.  Beer always seems to be Asahi or Sapporo, neither a fave.  Our sushi place offers an extensive selection of sake, but I've never delved into that ocean enough to know where I'm swimming.

This night, I noticed a Japanese craft beer, Kawaba Sunrise Ale.  Billed as an unfiltered amber ale, I figured it had to be pretty close to my wheelhouse.  It was good, beery and ale-y enough to make both of us happy.  But that's a fairly weak description, especially for a guy who can go on and on about wine.  Why does beer stump me?

I clicked my way over to Beer Advocate, as I do when I want to know what real beer geeks think about a brew.  The Kabawa had - in one user's opinion - "some caramel malt sweetness and toasted grain… a lightly sweet, even creamy coating of caramel… an increased brown bread quality… some light hops spice… a dry tea leaf feel."  And he didn't think it was all that complex.

Maybe I'll just stick with "gimme an IPA."  That's what I really want when I want a beer.