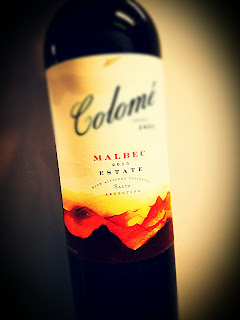 It's terrible when wine goes wrong.  A reliable Argentine producer, under the wing of a rock-solid California company... it should have been a taste treat.

The 2015 Colomé Malbec was made from grapes of four estate vineyards in the upper Calchaqui Valley in Salta, Argentina.  Alcohol sits at 14.5% abv.  The bottling is part of the Hess Family of wines and was highly regarded by Wine Spectator, which ranked it as one of their top 100 wines of 2017.

However, every now and then in the wine biz, a bad bottle gets through.  That's the case here.
Inky black, this Malbec has an unfortunate nose that reminds me of fingernail polish remover.  It's probably volatile acidity, a naturally occurring flaw in the winemaking process.  It's not a killer - in fact, some people find that VA is intriguing, interesting.

I've had wines afflicted with VA before, to a lesser degree, and found them offbeat.  This one is too far gone for me to appreciate.  The chemical odor is overwhelming and the displeasure seeps into the palate.  It's always a disappointment to encounter a wine for which I just can't muster up any excitement.  Several of my Delectable contacts have assured me that it's an anomaly, and I am certain of that.