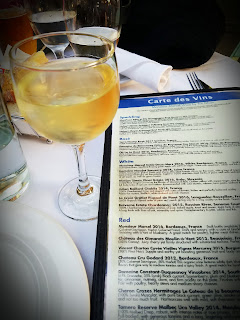 The Original Farmers Market in Los Angeles is a great place to meet friends for a bite or a sip, when the weather's nice.  And when is it not, in Southern California?  It's an institution at 3rd and Fairfax, a sprawling, casual, outdoor shopping area that was built in 1934.  Although it has gone through some upgrades through the years, it's still here.  You can stroll up to any one of the many food booths for a slice of cuisine from every part of the world.  The one my wife and I keep returning to is Monsieur Marcel Bistro.

Elaine was with us, while Brian and his entire family, in-laws included, were at a nearby table.  It was festive enough even before the drinks came, and it got better afterward.  Brian insisted on buying us an ale from the nearby bar - Marcel carries only wine - and it was a hit, although no one thought to make a note of it.  I did keep track of the wines I tried, although I failed to note which Rhône blend Elaine chose to go with her tuna tartar. 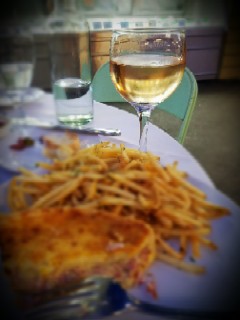 The 2016 La Croix Gratiot Picpoul de Pinet is from France's Languedoc-Roussillon region in the southwest.  The white wine is made from 100% Piquepoul Blanc grapes, and is loaded with minerality and freshness.  It's reportedly known as the "Chablis of the South."  There aren't many places in Los Angeles where one can find a Picpoul on the list.

The wine's importer says that the name of the appellation - Picpoul de Pinet - is spelled differently from the grape - Piquepoul - because French wine law does not allow a grape name to be included in the appellation.

Next up was the 2017 Terra Nostra Rosé from Corsica, a French island in the Mediterranean that is more closely identified with Italy.  There's little info I could find on the winery, but Marcel's list shows that the pinkie is made fully from Sciacarello (Sciacarellu in Corsica) grapes.  The grape is usually blended, not varietal, but they say it makes a smooth and spicy rosé.  They’re right.