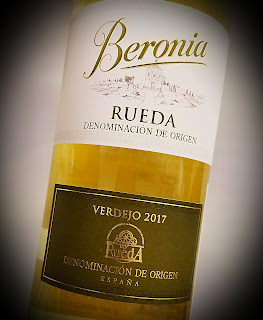 It was Spanish wine that started my own interest in the broad spectrum of vino.  It dragged a self-described "beer-only" guy into the wide world of wine after attending a tasting of Spanish wine on a lark.  I think about that tasting every time I have a glass of Verdejo.

Under the umbrella of Bodegas González Byass, Beronia Rueda operates sustainably in the Rueda region, using two different vineyards for its Verdejo wine.  The 100% Verdejo grapes were taken in two passes, one early and another later, the former for aromas and the latter for flavor.  The two lots were vinified separately and blended together.  Their website indicates plans to start using a huge oak vat in the vinification process.  This wine offers alcohol at 13% abv and an easy price point of about $13.

An early frost, late heat and hardly any rain made for a tough 2017 vintage in Rueda.  Beronia explains that the stony soil soaks up daytime heat and releases it at night, which they credit for the complexity of the wine.

The wine shows green-gold in the glass and looks clean.  It smells crisp, with a big grapefruit play up front and other citrus notes joining apple and anise. On the palate, there's a brisk acidity to accompany the nectarine, citrus and minerals which produce the clean mouthfeel.