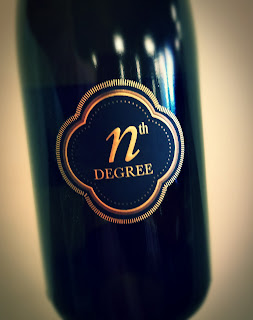 If you love Chardonnay, you probably love Wente Vineyards, and you may not know it.  The grape clone which is used to make 80% of American Chardonnay is here thanks to German immigrant C.H. Wente, who in 1912 planted a cutting from from a French nursery vine.  That Chardonnay plant became the Wente clone of the grape which is so popular today.

Wente is the country's oldest continuously operated family-owned winery, now run by the family's 4th and 5th-generations.  A virtual tasting event was hosted recently by the family historian, Phil Wente, and winegrower Niki Wente, who walked us through five different styles of their line that defined California Chardonnay.  You can visit that experience here.

The Wente Nth Degree line features not only this $70 Chardonnay, but also a Pinot Noir, Cabernet Sauvignon, Syrah and Merlot, all limited production wines.  The Chard holds alcohol at just above 14% and is made from 100% Chardonnay grapes taken from the estate’s Ernest and Herman vineyards, which are part of Wente’s heritage program.  They only made 21 barrels of this wine.

The Livermore Valley appellation sits near San Francisco Bay and offers winemaker Karl Wente some fairly great fruit with which to work.  The 2016 vintage was reportedly fairly dry despite more rain in the winter than in previous years.  The winery says the additional water made for larger yields of the small, concentrated berries.  Full malolactic fermentation was allowed in French oak barrels before aging on the lees for 14 months.

This wine is easily as rich as its price tag.  Looking as dark as apple juice, there's a smell of oak to this Chardonnay, but more than that is a buttery, creamy nose of apricot and Meyer lemon.  The palate is just gorgeous - similar fruit and rich notes, but with a racy acidity that surprises, considering the full mouthfeel.  Is it worth $70?  That's up to you and your bank but it's a damn good wine, that's for sure.