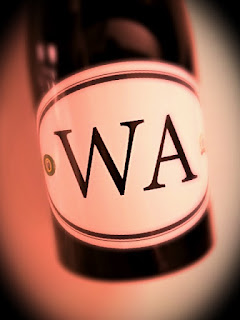 Locations is an experiment of place for winemaker Dave Phinney, of Orin Swift fame, in which he makes wines from all over the world.  These wines are labeled only with a big letter or two, depicting the place of origin - F for France, P for Portugal, I for Italy, and WA is for Washington.

Locations wines are non-vintage, have no appellation designated and are always blends, with Phinney's goal being to make the best wine from that country or state.  Each wine has a release number which represents the vintage for the majority of the wine in that specific bottling.  In this case, WA5 is made from Washington grapes harvested in 2015.

The label describes a sixth generation vintner and friend of  Phinney once telling him, "if I were twenty-one, single, and could make wine anywhere in the world, it would be Washington."  At which point Phinney must have whipped out his notepad and made a note to "check out WA." 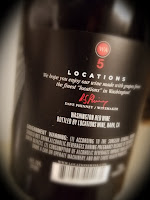 WA5 is a red blend of Syrah, Merlot and Petite Sirah grapes.  Alcohol gets up there, 15% abv, and it sells for around $20.  It's a bargain, and would be at an even higher price.  The wine was aged ten months in French and American oak barrels and bottled in Napa..

This dark wine offers a gorgeous nose of plums, blueberries and leather.  It's a rich nose, one that belies the $20 price sticker.  On the palate, there are savory tones that play against the fruit, smoky and earthy and laden with minerals.  It drinks like a good Rhône blend.  A really good one.