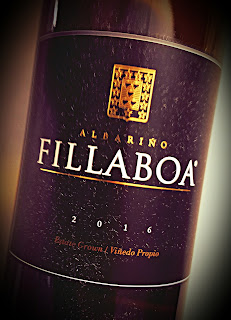 There's a Snooth virtual wine tasting coming up today that features Albariño wines from Spain's Rias Baixas region of Galicia.  I'm tasting nearly a dozen different Albariños for that reason - not because it's spring, or because it's almost summer, or because I love Albariño.  Although those are all reason enough.

The Fillaboa website leads with, "Creating is not an easy task when surrounded by so much noise."  That's how Bodega Fillaboa's owner decided to go for the peace and quiet of the Rias Baixas land where the 70-hectare estate is located in Salvatierra de Miño.  The "good daughter" referred to in the Galician name sits set off from its surroundings by an ancient stone bridge and stands as one of the oldest and biggest estates in Pontevedra.  The bodega is only 150 feet from the Portuguese border and 22 miles from the Atlantic Ocean.  They also make three spirits, or aguardientes, from their Albariño grapes.

The 2016 spring was rainy and the summer was the hottest and driest in the previous 50 years.  Alcohol in this wine is restrained, as is customary in the region, at 12.5% abv.  If this Albariño is an indication, the creating is very good at Fillaboa.

The Fillaboa Albariño 2016 has a bit more golden tint than usual, and bit more earthiness on the nose.  There’s still a bouquet of flowers to smell, along with apples and citrus.  On the palate there's a soft salinity that goes along with an almost racy acidity.  Green apples and limes come forth and linger on the finish.