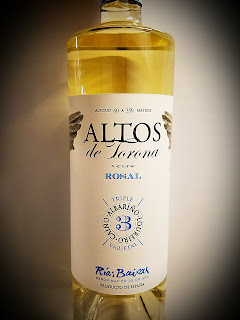 A virtual tasting session is coming on May 16th that involves Albariño wines from Spain's Rias Baixas region of Galicia.  It's being put on by Snooth and I'm tasting nearly a dozen different Albariños for that reason - not because it’s spring, or because it’s almost summer, or because I love Albariño.  Although each of those reasons would have been enough of a convincer.

Spain's Rias Baixas Denomination of Origin was established in 1980, specifically for the Albariño grape.  Of course they had been making wine in the region for centuries before.  In fact, the winery credits 12th-century monks for providing inspiration to this day.  About a dozen grapes are permitted in Rias Baixas for making wine.

Bodega Altos de Torona is located a stone's throw from the Miña River and slightly harder toss from the Atlantic Ocean.  The vineyard's position on the south-facing slopes shields it from the cold, wet weather found on the other side.  Winemaker Pablo Ibañez fermented this 100% Albariño wine in stainless steel to an alcohol level of 13% abv.

This pale Albariño has a citrus-first nose showing lemons, peaches and twist of tangerine.  The palate displays tart apples, lemon zest and some white pepper.  The acidity is fresh and the wine finishes very clean, with minerality lingering after the sip.