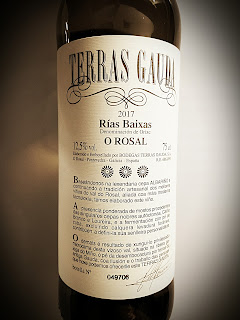 There's a Snooth virtual wine tasting coming up on May 16th that involves Albariño wines from Spain's Rias Baixas region of Galicia.  I'm tasting nearly a dozen different Albariños for that reason - not because it's spring, or because it's almost summer, or because I love Albariño.  Although each of those reasons would have been enough of a convincer.  I'll keep you posted on details, but it's usually easiest to jump on Twitter and join the fun.

Bodegas Terras Gauda makes their O Rosal Rias Biaxas from grapes grown in one of the subregions of Rias Baixas, O Rosal.  It's a little piece of land butted up against the Miño River to the south and the Atlantic Ocean to the west.

Terras Gauda has three wineries and a vegetable cannery under its corporate umbrella.  The O Rosal Valley winery is a couple of decades old and now produces about 1.5 million bottles of wine each year.  This Albariño blend is their flagship wine.

The Terras Gauda O Rosal Rias Biaxas White Wine is not a varietal wine, which is how Albariño grapes are often vinified.  This one is 70% Albariño, 20% Caiño Blanco and 10% Loueira, the latter two grapes being found in the northeastern corner of the Iberian peninsula.  Its alcohol content is low at 12.5% abv and it sells for as little as $12 online.

This wine has a lovely golden-green hue and a brisk nose of stone fruit, Meyer lemon and flowers.  The palate shows those qualities plus a hefty load of minerals and acidity, enough to make oysters a great idea.