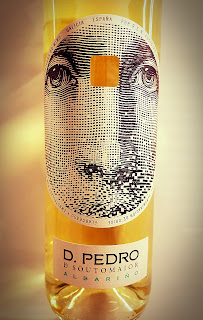 Albariño is a lovely white wine grape that is predominant in Spain’s northwest corner. It's the reason they get out of bed every day in the Rias Baixas region of Galicia. It's also the driving force behind a winery known as Adegas Galegas. If you know the area, the company is in Salvaterra do Mino, nudged up against Portugal's northern border.

The firm's Don Pedro line concentrates on Rias Baixas and its heritage of Albariño. The wines are named for Don Pedro de Soutomaior, a 15th century knight and a hero of the region. There's reportedly some speculation that he was also Christopher Columbus. I could find no documentation that anyone ever saw them in the same room together, so maybe that’s true.

Winemaker Asunción Carballo leads a team of people who strive to produce wines which exhibit the character of the region. She rides atop a wave of talented female winemakers in Spain. The wine's alcohol content sits at 13% abv and it sells for just under 20 bucks.

This pale wine, the Don Pedro de Sotomaior Rias Baixas Albariño 2017, is subtle on its nose, with very light aromas of citrus and wet rocks. The sniff is not rendered tart by those descriptives, however. There is a softness to it that takes the edge away. The palate is another matter, as a rippingly joyous acidity makes itself known immediately. Flavors of crisp apples, lemons and a touch of orange are as vibrant as they seem here on the page, like a lovely spring day bathed in the cool wind of Galicia. The pleasure lasts long after the sip disappears. Pair this with fried calamari.