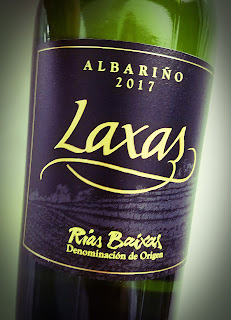 There's a Snooth virtual wine tasting coming up on May 16th which will involve Albariño wines from Spain’s Rias Baixas region of Galicia.  I'm tasting nearly a dozen different Albariños for that reason - not because it's spring, or because it's almost summer, or because I love Albariño.  Although each of those reasons would have been enough to convince me.

The Laxas bodega has been in the family since 1862, and they watch over their 13-acre estate vineyard with careful eyes.  The vines grow on steep terraces which look south over the Miña River in sandy, mineral-laden soil.  Winemaker Jorge Dominguez Hervella works with great fruit and makes the most of it, producing an Albariño that speaks of its land.  Alcohol on the 2017 Albariño checks in as 12.5% abv and it sells for around $18.

The 2017 Laxas Albariño is a pale yellow wine which has an interesting nose full of lemon-lime, apricot and a lanolin note.  A bit of earth peeks out amid the smell of white flowers.  The mouth is rather full, yet the acidity is fresh and zingy.  Lemony and tropical fruit flavors abound in a mineral-laden palate and leave me craving a calamari and scungilli salad.