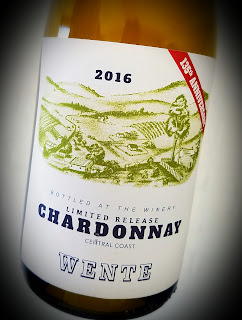 If you love Chardonnay, you probably love Wente Vineyards, and you may not know it.  The grape clone which is used to make 80% of American Chardonnay is here thanks to Wente.  In 1912, German immigrant C.H. Wente planted a cutting from from the vine nursery at France's University of Montpellier.  That Chardonnay plant became the Wente clone of the grape.

Wente is the country's oldest continuously operated family-owned winery, now run by the family's 4th and 5th-generations.  A virtual tasting event was hosted recently by the family historian, Phil Wente, and winegrower Niki Wente, who walked us through five different styles of their line that defined California Chardonnay.  You can visit that experience here.

Wente's Celebratory Chardonnay celebrates 135 years of making wine.  2018 marks that accomplishment, and they've come a long way since 1883.  It's 100% Central Coast Chardonnay which is sourced from their estate vineyards in the Livermore Valley and the Arroyo Seco AVA in Monterey County.  Karl Wente made a thousand cases of the wine, which clocks alcohol at 13.8% and retails for $40.

The wine was fermented both in barrels and stainless steel, with the barrel lots receiving malolactic fermentation for a full, rich mouthfeel.  It was aged for 16 months in a combination of new and neutral American and French oak.  They stirred the lees a couple times a month.

This Chardonnay comes on big and bold, sporting a nose of apples, peaches and oak.  The mouthfeel is creamy, but the acidity still zips.  Wood dominates the flavor profile, too, but if you're in the mood for it, it hits the spot.  Behind the oak lies stone fruit, pineapple and citrus flavors.  The finish carries the memory of those barrels quite a distance.