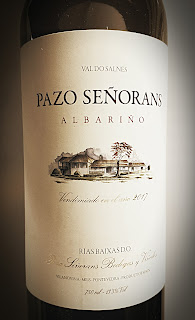 There's a Snooth virtual wine tasting coming up on Wednesday that involves Albariño wines from Spain's Rias Baixas region of Galicia.  I'm tasting nearly a dozen different Albariños for that reason - not because it's spring, or because it’s almost summer, or because I love Albariño.  Although each of those reasons would have been enough to convince me.

The Rias Baixas Denomination of Origin was established in 1980, specifically for the Albariño grape.  Of course they had been making wine in the region for centuries before.  The winery credits 12th-century monks for providing inspiration to this day.  About a dozen grapes are permitted for making wine.

The winery is a former Galician ancestral country home (pazo) in the village of Señoráns, but it's not known which was named for which.  The vineyard's soil is largely broken down granite, which lends a strong mineral sensibility to the vines.  In addition to its line of Albariño wines, the bodega also features a distillery where they make a sort of Albariño brandy called aguardientes.  One variety is brilliantly golden while the other is clear.  Both are 100% Albariño, the golden one is made with skin contact, anise and cilantro seeds.  I did not taste them, but they sound quite interesting.

The wine is made in stainless steel tanks and alcohol hits the usual 12.5% abv. It sits on its lees during vinification, and that imparts a bit fuller mouth while maintaining that amazingly fresh acidity.

This Albariño shows lemon, lime and lanolin on the nose, with a whiff of apricot.  The pale color is golden straw, and the palate comes forth with a mighty acidity and a mouthful of green apples, on the tart side.  Minerality makes a big play, and the finish is medium-long with a citrus zestiness.