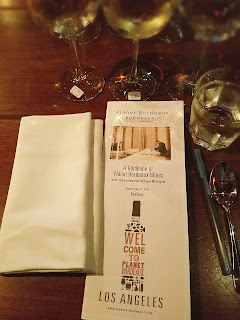 Bordeaux needs no introduction.  But they've decided to write one for themselves anyway.  One that centers not on the great taste and age-worthiness of their wines, but on their affordability.

It sounds a bit like a San Francisco real estate agent trying to convince us that she actually has quite a few reasonably priced homes on her list.  Nevertheless, the affordability of Bordeaux wines can't be overlooked, you simply have to know where to look.

I recently attended a "Goldmine of Planet Bordeaux Wines" tasting and pairing event, which highlighted Bordeaux and Bordeaux Supérieur wines which sell for under $20.  Sommelier Michael Madrigale led the event, which was held at Republique in Los Angeles.  The back room was packed with writers, trade and PR people who all wanted to be surprised as Madrigale unveiled the shocks of their lives.  Although most of the audience was probably hip to the notion that Bordeaux doesn't have to cost an arm and a leg, the response he got was great enough that he sometimes couldn't shout loudly enough to be heard over the roar. 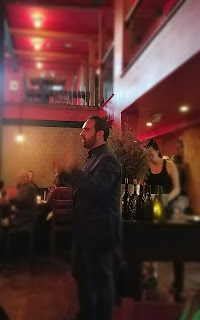 Madrigale said, "The perception is that Bordeaux is out of price range for most people.  That isn’t true."  He proceeded to taste us through a selection of fine wines which he said were under 20 bucks.  All the wines were impressive, and none would have disappointed at a $40 price tag, much less $20.

Republique's Dover sole with Morel mushrooms and white asparagus was paired with two Bordeaux blancs.  Clos de Lunes Sauvignon Blanc 2016 offered more minerals than grassiness, but so did its companion.  CDL was smoother, a Sauternes blend of 70% Semillon and 30% Sauvignon Blanc grapes, oak vinified.  The Château Reynon  2016 gave heavier herbal notes, as might be expected from 100% Sauvignon Blanc grapes.  The wine was made in a 50/50 mix of oak barrels and steel tanks. It was the more tart of the pair.

The wood-fire grilled lamb with charred spring vegetables drew a pair of Bordeaux rouges.  The Bad Boy (Mauvais Garcon) 2015 was dark with big jammy plum on the nose and bold, black fruit on the palate, which was affixed with extra tannins.  The Château Lafont-Fourcat 2015 showed a nose of perfumed black currant and a palate of black and blue berries, with sweeter tannins.  Both are Entre-Deux-Mers wines, from the part of Bordeaux that's "between two seas" - the Garonne and the Dordogne rivers.

After dinner, the cheeses were paired with two Bordeaux Superieur selections.  Château Le Conseiller 2014 had a beautiful, perfumed nose that literally smelled purple.  The big, dark palate matched and the stiff tannins begged for softer cheeses.  The Château La Cour d’Argent 2015  smelled of red fruit and tasted like red currant.  Firm tannins paired better with the cheese, but the cranberry and walnut bread worked well with both wines.

If you shop for Bordeaux with an eye on the price tag, you'll find values that will surprise.