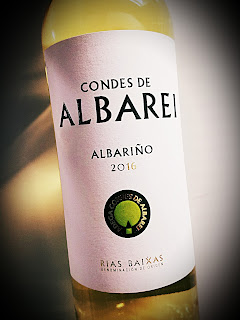 Albariño is a lovely white wine grape that is predominant in Spain's northwest corner.  It's the reason they get out of bed every day in the Rias Baixas region of Galicia.  Snooth staged an online virtual tasting session featuring Albariño wines from Rias Baixas, and I was lucky enough to be invited.

The winery known as Condes de Albarei is located in Castrelo, a little town in the province of Ourense.  The winery was founded in 1988 by a group of Salnés Valley growers who wanted to concentrate on Albariño.  They picked a great place to do it, as the valley is reportedly the birthplace of the grape.  Those growers still own and run the place, so much into their work that they don't appear to have a website.

The estate vineyards cover more than 700 acres with mountains all around and the Umia River running through.  Alcohol in the wine is customary for the area, around 13.5% abv, and it sells for $14 or less online.

The Condes de Albarei Albariño wine is golden in the glass and smells of apricots and flowers.  The citrus comes across as a mix of lemon and tangerine.  On the palate, it's one of the more sippable Albariños I've tasted from the region.  The acidity is fresh but doesn't rip off one's tongue.  Flavors of Granny Smith apples and Meyer lemons come forward, along with some other fruits that may have been named after people.  It's an earthy drink that lasts a while on the finish.