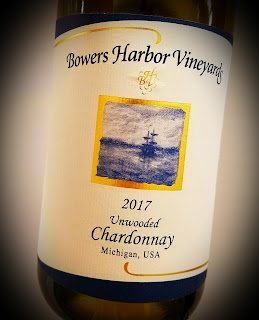 The locals call it paradise on a peninsula.  Michigan's Old Mission Peninsula wine region sticks out of the northwestern edge of the state's main body into Lake Michigan.  Situated on the 45th parallel, about the same latitude where you'll find Bordeaux, it's a 19-mile spit which juts northward and forms the east and west sides of Grand Traverse Bay.  It's only four miles wide at its broadest point.

They grow wine grapes there.  The blue waters surrounding the land are some 600 feet deep, that produces what they call a "lake effect" which I am told protects the vines with snow in winter, slows bud break in spring to avoid frost damage, and extends the growing season by up to four weeks.

The Bowers Harbor wine business was established in 1991, four years after the Old Mission Peninsula was granted AVA status.  The estate sits on a former horse farm, with 20 acres of grapes now growing.  The vines include Riesling, Gewurztraminer, Pinot Grigio, Merlot, Pinot Noir, Cabernet Franc, Cabernet Sauvignon and Chardonnay.  The property is owned by Linda Stegenga and her son, Spencer.

The 2017 Bowers Harbor Unwooded Chardonnay presents the grape unadorned by the effect of oak barrels.  The stainless steel fermentation includes full malolactic creaminess at a very reasonable alcohol level of 12% abv.  The wine sells for $16, and is a steal at that price.

This straw-colored Michigan Chardonnay smells of nothing but fruit, since it was never introduced to oak.  Meyer lemon, stone fruit and tropical notes rise up from the glass.  On the palate, that's where it really takes off.  The fruit flavors jump right out, but it's the full malolactic fermentation that steals the show.  The wine is so full and creamy, you'd swear there had to be some oak barrels somewhere along the way.  Racy acidity adds to what is already an embarrassment of riches.