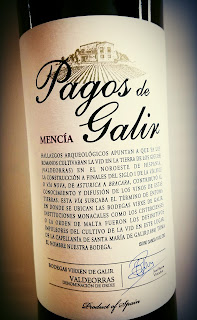 The 2016 Pagos de Galir Mencia is made in the Spanish region of Valdeorras from 100% Mencia grapes. Mencia is the main red grape in the DO, which is in Galicia's Ourense province in the northwestern part of the country.  The Romans mined for gold in the area, then planted grapevines when they felt they had gotten all the precious metal out of the earth.

The 2016 harvest was down by nearly a third from the previous year, thanks to spring rains, hot temperatures and summer hail. The wine spent six months aging in American and French oak barrels, and another six in the cellar.  Alcohol sits at 13.5% abv and the wine retails for a reasonable $17.

Mencia grapes once produced a relatively light and fragrant wine, but in recent years winemakers have been getting much more concentration.  In fact, this wine is downright inky.

Upon opening, this Spanish wine has a tight nose that offers only a whiff of red fruit and bit of spice.  After breathing for awhile, things loosen up considerably.  Six months barrel aging didn't take over the fruit.  There are plenty of those Mencía grapes to smell.  Plenty to taste, too, although the oak spice comes through a tad stronger on the palate.  Tannins are firm initially, and the wine feels fresh and young in the mouth.  However, the structure softens quite a bit after a couple of hours in the glass.