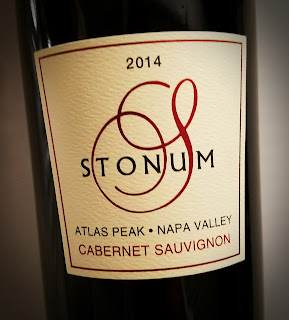 A seven-acre plot of Tokay grapes was the start of Stonum Vineyards in the late 1970s.  Sibling vintners Mike and Kathy Stonum started making wines in 2006.  Those ancient vines of Mediterranean origin, by the way, were ripped up to make way for Zinfandel.  Lodi Wines says Tokay was once very heavily planted in the region and was primarily used as a table grape, not a source for world-class dessert wine.  Zinfandel is now the hook on which Lodi hangs its ranch hat.

The 2014 Stonum Napa Valley Cabernet is made from grapes grown in the Atlas Peak appellation.  The wine hits a rich 16% abv in alcohol, but does not taste boozy.  It sells for $60.

This wine is dark purple around the rim and nearly black everywhere else.  The nose gives off smoke, blueberries, cassis and a faint graphite note.  The palate shows a delicious dark fruit profile, with a savory streak of leather, rosemary and spice running through it.  The acidity is lip-smacking and the tannins are firm without taking over.  You won't forget it - the finish won't let you.  Pair with a steak or roast, of course, but pork or roasted chicken will work as well.