Zinfandel For The Barbecue 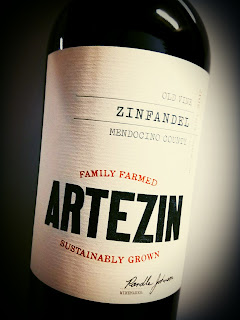 Artezin winemaker Randle Johnson is billed by the Hess Family as a "champion of heirloom varietals," which makes him a likely guy to work with some ancient California vines.  His 2017 Artezin Old Vine Zinfandel was made from grapes pulled out of vineyards in Mendocino County, off of vines which were planted by Italian and Swiss immigrants - whose families still tend the crops today.

The winery says the old growers would plant Zinfandel around the perimeter of the vineyard, to hide from sight the other grapes they were growing.  They apparently considered their field blends to be proprietary information.

The wine consists of 85% Zinfandel grapes and 15% Petite Sirah.  The folks at parent company Hess Family Wine Estates says this Zinfandel is as good at a summer barbecue as it is at Thanksgiving - just throw it in a cooler for a half hour or so before grilling.  The wine was aged in neutral French oak barrels, hits 14.8% abv on the alcohol scale and sells for $16.

The 2017 Artezin Old Vine Zinfandel Mendocino is medium-dark and sports a playful nose of strawberry and boysenberry with a cinnamon twist.  On the palate, raspberry and cherry play off of one another in front of a spicy backdrop.  The tannins are smooth.  The wine drinks young and breezy.