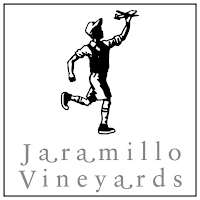 Owners Robert and Barbara Jaramillo met when he was stationed with the Navy in Long Beach, California.  After a career as an airline pilot, Jaramillo decided to grow grapes and make wine, continuing a family precedent.  His father was a home winemaker, but his grandfather had been the largest producer of wine in the area before Prohibition.

Jaramillo Vineyards has plantings of the Norton Cynthiana grape, which has reportedly not been grown west of Missouri until now.  Norton is considered to be "America’s grape," and was championed by Thomas Jefferson. 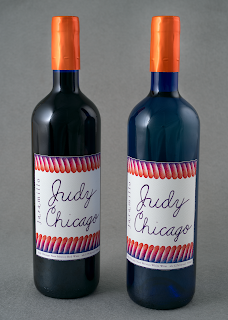 Judy Chicago's art will be shown on July 20-21, 2019 at the opening of the Through the Flower Art Space in Belen, New Mexico.  Chicago and her husband have lived in Belen for a quarter century, and the town is also the home of Jaramillo Vineyards.  The art space is right across the street from the tasting room.

The winery plans to release the Judy Chicago red and white wines on July 21st.  Both will feature a label and bottle design conceived by the artist herself.  She chose a cobalt blue bottle which she feels compliments her label design.  Chicago was personally involved in selecting the final blend for each wine.  I haven't tasted them, but I'm told the Judy Chicago red will be a Petit Verdot blend and the Judy Chicago white will be a dry blend of Chenin Blanc and Arneis.

You can read more of the Now And Zin effort to taste wine from all 50 states in the Wine Country series.