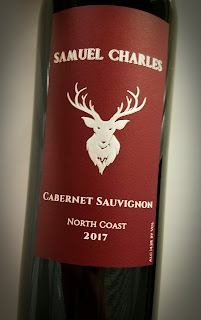 The little town of Nice, California sits on the northern shore of Clear Lake in Lake County, northwest of Sacramento.  Wikipedia cites a source saying that the town was originally named Clear Lake Villas, until Charles William Bayne renamed the spot after his former hometown in France, around 1930.

Dennis Kreps owns the Samuel Charles label there along with his father, Stephen.  The brand's name comes from the names of Dennis' sons.  Noted winemaker Bob Pepi creates the wines.  The brand is reportedly launching nationwide distribution for the first time this year, with a separate single-vineyard Cab and a Sauvignon Blanc, both sourced in Lake County.

The 2017 Samuel Charles Cabernet Sauvignon is all North Coast grapes - 91% Cabernet Sauvignon, 5% Petite Sirah, 4% Malbec - grown in volcanic soil about 2,100 feet up in the mountains.  The wine was aged for nine months in French and American oak barrels, about a third of them new, and alcohol sits at 14.2% abv.  The Cab retails for about $30.

This North Coast Cabernet Sauvignon blend has a dark and savory nose with a bit of a chemical smell poking through the black fruit and spice.  The palate is better, still dark and savory, with a rustic edge which reminds me more of Paso than Napa - but is actually somewhere metaphorically in between.