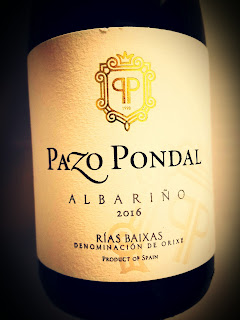 The folks from the Spanish wine region Rias Baixas have a great product to push.  Albariño is not only a delicious white wine on its own, but it’s one of the more food-friendly grapes you'll find.  In fact, Albariño seems to crave a food pairing so it can show its best.

The Pazo Pondal winery is in the Galicia area of northwest Spain, the Miño Valley, the Rias Baìxas wine region, the Condado do Tea subregion.

The 100% 2016 Albariño grapes were harvested from the lower altitude Leira Longa plot, carefully crushed and the juice fermented in both stainless steel tanks and French oak barrels.  These particular grapes are grown with less acidity and more body than those from higher elevations.  The vines are as young as 20 but as old as 60 years.  The wine stayed in wood, on the lees, for some ten months.  Alcohol is a restrained 13% abv, and the wine sells for $20.

This wine carries minerals and Meyer lemon on the nose, and plenty of both.  The palate shows citrus and a great salinity, with none of the floral notes Albariño is known for, the notes that generally push me away.  The savory aspect of this one is very different from most Alabariños, and it really sets the wine apart.  The mouthfeel is quite full, almost creamy.