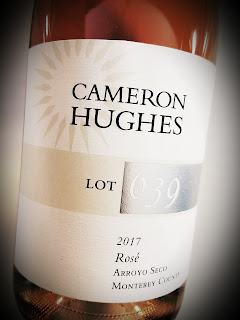 California wine négociant Cameron Hughes owns no vineyards and has no official winery.  He buys already produced wine from established makers on the down low, with an agreement not to reveal the source.  He then sells the wine online through his wine club, which he calls a wineocracy, bringing top-shelf wines to lower-shelf wallets.  Hughes says he keeps prices low by removing the middleman, the distributor and retailer through which store-bought wines must pass.

The sustainably farmed grapes for the 2017 Cameron Hughes Lot 639 Rosé were grown in California's Central Coast region, specifically the Arroyo Seco AVA in Monterey County.  Hughes says the pink wine was made by "perhaps the most famous producer on the entire Central Coast," without giving up the identity.  Hughes claims he's selling the wine for nearly half its original price.  The grape is Valdiguié, which not commonly found outside of the south of France.  Alcohol tips in at a reasonable 12.8% abv and the wine sells for $13.

This rosé is a rich salmon pink, a really beautiful hue.  The nose shows ripe cherry and melon aromas, while the palate brings strawberries and apricots to the table.  It's a very complex pink wine.  The acidity is gentle, so it's a great sipper.  However, you can pair it with a salad, light appetizers or white meat with no problem.