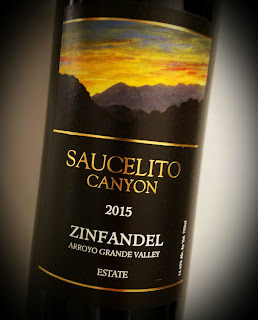 The back label of the Saucelito Canyon Estate Zinfandel says grapes were first planted at Rancho Saucelito in 1880, on the ocean side of the coastal range in the cool-climate Arroyo Grande Valley of California's Central Coast.  The Zinfandel vineyard survived Prohibition, but it was abandoned in the 1940s, then ravaged by fire and animals.

Although the vines were decimated, the roots kept sending new growth shooting upward each spring, and the original vineyard was restored in the 1970s by Bill Greenough.  His son, Tom, now makes the wine from those revitalized, dry-farmed grapevines.  The 2015 Estate Zinfandel hits only 14.1% abv and sells for around $35.

This deep, ruby red wine has enough black pepper on the nose to prompt a sneeze.  There's a ton of intense black fruit as well, along with licorice, tobacco and some rustic oak.  The palate shows off its country side, too, with black and blue berries and an oak treatment that does not go overboard.  Tannins are not extremely forceful, but there's enough structure to make it worth your while to pair it with lean meat dishes or pasta.