Spanish Wine: Rioja To The Rescue 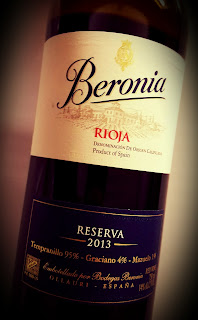 It was Spanish wine that started my own interest in the broad spectrum of vino.  It dragged a self-described "beer-only" guy into the wide world of wine after attending a tasting of Spanish wine on a lark.  I think about that tasting every time I have a glass of Rioja.

Under the umbrella of Bodegas González Byass, Bodegas Beronia operates sustainably in La Rioja as well as Rueda.  The 2013 Beronia Rioja Reserva was made from 95% Tempranillo grapes, 4% Graciano and a 1% dash of Mazuelo.  The wine was aged for three years, in French and American oak barrels and in the bottle.  Alcohol is pretty reasonable for Rioja, at 14% abv and it sells for about $20, not bad for a wine of this quality.

The Beronia Rioja Reserva is a dark garnet in the glass, with a nose of black cherries and plums, abetted by leather, vanilla and a nice oak spice.  The palate is rustic and savory, its age showing already.  Black fruit tangles with tobacco and earth notes.  There’s a good tannic structure and a lengthy, savory finish.  Pair it with pork, sausages and Manchego cheese.